Highlighted Conclusion
Soybean cross-sowing with the recommended or double the recommended plant population does not aid in weed control or increase soybean grain yields.

The Paraná State is the second largest soybean producer in Brazil and uses approximately 88% of the grain production areas in the summer harvest for the sowing of the legume. Indeed, in this region, approximately 17 million tons of soybeans were produced in the 2016/2017 summer season, equivalent to 17% of national production (DERAL 2017). Changes in agricultural practices have been made in order to achieve maximize profits and productivity, as necessitated by high market prices. In this economic context, traditional and recommended crop practices rotation and adequate terrain sizing have been discarded by some producers, and others practices, such as cross-sowing, have been adopted based on empirical findings.

Tests carried out by researchers focused on soybean productivity have supported the application of the cross-sowing technique (Procópio et al. 2013), although the results reported in the literature are controversial. For example, soybean cross-sowing did not increase grain yields in the northern region of Paraná State (Balbinot Jr. et al. 2015a, 2015b, 2016) although in others Brazilian States, such Mato Grosso do Sul (Lima et al. 2012), São Paulo (Ormond et al. 2015, Silva et al. 2015ab), and Goiás (Buso et al. 2016, Souza et al. 2016), grain yields increased with cross-sowing of soybeans compared with soybeans in uncrossed rows. In contrast, reductions in grain yield also have been observed with the cross-sowing technique; a spatial arrangement with inter-row spacing of 0.5×0.5 m was found to decrease productivity by 8.2% in relation to uncrossed crops with inter-row spacing of 0.4 m (Holtz et al. 2014). In another study, soybean cross-sowing resulted in greater variability in the final population of plants compared with conventional sowing (Balbinot Jr. et al. 2015a) due to soil mobilization and additional compaction with transverse sowing at rows (Balbinot Jr. et al. 2015b). Moreover, greater soil mobilization with cross-sowing of soybeans increases the percentage of soil exposed, mainly with spacing between rows of 0.6 m, which may affect the emergence of positive photoblast weeds and the loss of water by evaporation and erosion (Balbinot Jr. et al. 2016).

Thus, we hypothesized that soybean cross-sowing in populations equal to or twice as large as those used in conventional uncrossed parallel rows may increase the yields of soybeans and that populations of similar or larger plants in cross-sowing may decrease weed infestation. Accordingly, in this study, we evaluated the effects of the spatial arrangements of plants on weed control the soybean crop.

The experiments were carried out in an Oxisol clayey at the Regional Research Center of Ponta Grossa of the Agronomic Institute of Paraná (IAPAR), Ponta Grossa municipality (25°05’42″S, 50°09’43″W, 969 m.s), Paraná State, Brazil. The region had a humid subtropical climate, with mild summers (cfb classification according to the Köppen Climate Classification) and a uniformly distributed rainfall, without a dry season; the average temperature of the hottest month did not reach 22 °C, and the amount of precipitation was 1,100–2,000 mm year-1, with frequent frosts and intense rains for an average of 10–25 days year-1. Cumulative rainfall data and average minimum and minimum daily temperatures for the experimental period from December 2015 to April 2016 are shown in Figure 1.

At 15 days after the emergence of the plants, thinning was performed in order to establish the populations according to the respective treatments. After 30 days of thinning, three samples per plot of 0.09 m2 each were collected to evaluate the weed fresh matter yields; after drying in an oven with forced air circulation at about 65 °C, the fresh matter yields were converted to dry matter yields. From the R2 to R3 stages or from full flowering at the end of flowering with pods up to 1.5 cm, the heights of the plants were evaluated from the measurement of five plants in the useful area per plot. Additionally, five plants of the useful area were collected, segmented into aerial parts and roots, and dried in an oven at 60°C until a constant mass was reached to estimate the dry matter of the shoot and roots. After washing, the soybean root nodules were counted and dried in an oven with forced air circulation at 45 °C to obtain dry matter of root nodules. In the third leaves of the middle third of 10 plants per plot, total chlorophyll was measured using a Falker chlorophyllometer. Photosynthetically active radiation measurements were performed at the R4 stage, below and above the canopy of the plants, and the leaf area index was calculated.

There were no significant differences (p > 0.05) between plant heights in uncrossed and cross-sowed plots, with different plant populations, and with or without herbicides (Table 1); the observed values were within the limits considered ideal for mechanical harvesting, from 80 to 100 cm (Ormond et al. 2015). The vertical growth of soybean plants can be affected by the sowing density (Lima et al. 2012, Balbinot Jr. et al. 2015a), the cultivar employed (Lima et al. 2012), and the plant arrangement (Lima et al. 2012, Santos et al. 2015, Silva et al. 2015a). However, plant height has little agronomic relevance (Balbinot Jr. et al. 2015a), with no correlation (p > 0.05) with grain yield per pod or grain yield of the soybean crop (Bisinotto et al. 2017). Notably, higher plants so allow mechanized harvesting of the crop, without risk of plant lodging (Heiffig et al. 2010).

Table 1. Plant height, shoot dry matter (SDM) and root dry matter (RDM) and leaf area index (LAI) of soybean plants grown on uncrossed and crossed-sowing with plant populations of 260,000 and 520,000 (2x) plants ha-1, with and without (-H) application of herbicide.

Soybean cross-sowing with the same plant population as in uncrossed sowing produced 64.5% more shoot dry matter (SDM), although the difference was not significant (p > 0.05). Cross-sowing with twice the recommended plant population increased (p < 0.05) the SDM by 137.1% and 119.0% (8,385 kg ha-1 on average) compared with conventional uncrossed and herbicide-free soybeans cross-sowed with the recommended plant populations, respectively, which did not differ (p > 0.05) from each other (Table 1). Balbinot Jr. et al. (2016) did not observe differences between SDM in cross-sowed and uncrossed soybeans with a determined growth habit (BRS 294 RR); however, in plants with an indeterminate growth habit (BRS 359 RR), uncrossed rows resulted in 23.2% more SDM that cross-sowed soybeans. A study by Procópio et al. (2013) showed that BRS 359 RR soybeans (exhibiting indeterminate growth) produced more leaves and branches per plant in a cross-sowed system, although this difference did not occur per unit area due to the reduction in plant density evaluated at harvest due to the lower emergence of plants with cross-sowing of soybeans. As in the present work, plant populations were established by means of excessive seeding with subsequent thinning, and there were no effects of the treatments on plant height. Therefore, we concluded that cross-sowing of soybeans produced more SDM, probably via enhanced production of leaves and branches. In contrast, Santos et al. (2015) observed that four indeterminate growth soybean cultivars produced an average of 11.7% more SDM in crossed rows than in uncrossed rows.

Root dry matter (RDM) yields represented an average of 31.5% of total plant dry matter, and there were no differences between treatments, possibly due to the high variability of the results (Table 1).

Leaf area index (LAI) was 8.0% higher (p < 0.05) in cross-sowed than in uncrossed soybeans, and there were no differences (p > 0.05) between the different cross-sowing modalities studied (i.e., different plant populations and weed control treatments; Table 1). These results were contradictory to those obtained by Balbinot Jr. et al. (2016), who observed 25.0% more LAI in uncrossed than in cross-sowed indeterminate growth soybean cultivars. Souza et al. (2016) also did not observe a difference in LAI values between cross-sowed or uncrossed soybean cultivars of determined or indeterminate growth habits, indicating that the changes in the spatial arrangement of the crop did not cause morphological changes in plant architecture. Soybeans produce surplus leaves during seed filling and exhibit increased LAI and water demand when resources could be diverted to fill more seeds, resulting in decreased grain yields (Srinivasan et al 2017).

Soybean cross-sowing increased (p < 0.05) the nodule numbers by 49.1% and 63.2% compared with those of uncrossed and cross-sowed rows with double the plant population without herbicide, respectively. In contrast, cross-sowed soybeans with or without herbicide did not showed increased root nodule mass (p > 0.05) in comparison to uncrossed crops, although soybeans cross-sowed with double the plant population, with or without herbicide, did show a 117.5% increase in root nodule dry mass per plant (p < 0.05). This result was contradictory to the results of a study demonstrating that decreasing the amount of plants per line may increase the availability of root exudates capable of promoting rhizobia growth and increasing the rate of biological nitrogen fixation (Luca and Hungria 2014). These researchers observed increases in the number of plants per row at spacings between 0.5 and 1.0, which did not result in fluctuations in the number of nodules per plant. However, the mass of nodules per plant was higher with 16 plants per linear meter spaced at 0.5 m compared with that with four plants per linear meter spaced at 0.5 m and 16 plants per linear meter spaced at 1.0 m.

In our study, despite the differences in quantities and masses of root nodules between the treatments, there were no differences (p > 0.05) between values of the Falker chlorophyll index (FCI; Table 2). These results diverge from those obtained by Werner et al. (2016), who observed a linear decrease in SPAD index with increased seeding density of indeterminate growth habit soybean.

Table 2. Number and dry mass of root nodules, Falker chlorophyll index (FCI) and fresh (FMW) and dry matter (DMW) of weeds shoots in soybean cultivated with non-crossed sowing lines and      crossed with plant populations of 260 and 520 (2x) thousand plants ha-1, with and without (-H) application of herbicide.

With herbicide application, soybean grain yields did not differ (p > 0.05) among treatments with uncrossed soybeans, cross-sowing with the recommended population, and cross-sowing with twice the recommended population. Moreover, there were no differences (p > 0.05) between grains yields in treatments with cross-sowing and the recommended plant population and treatments with cross-sowing without herbicide with twice the recommended plant population (Figure 2). These results were consistent with those obtained by Balbinot Jr. et al. (2015a,b, 2016), who did not observe an increase in grain yield with soybean cross-sowing with different spacing rows and seeding densities. According to Balbinot et al. (2015a), the reduction in the number of plants at harvest was a reflection of the harmful effects of the second sowing operation, transverse to the first one, resulting in a higher seed expenditure compared with that of uncrossed sowing. As in the present work, thinning of plants was carried out to guarantee that in the studied soybean populations, the absence of significant differences could be attributed to grain distributions in the branches and stems, which increase and decrease, respectively, with soybean cross-sowing (Balbinot et al. 2015b). 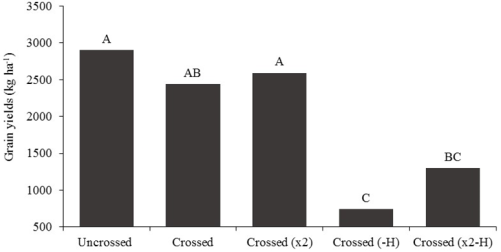 Figure 2. Soybean grain yields as a function of uncrossed and crossed sowing lines with plant populations of 260 and 520 (2x) thousand plants ha-1, with and without (-H) application of herbicide. Different letters indicate difference by Tukey test at 5% probability.

With the treatments without herbicides, significant reductions (p < 0.05) of 69.6% and 49.9% were observed for grain yields in soybeans cross-sowed with the recommended population and cross-sowed with twice the recommended population, respectively. The average decrease in grain yield with the exclusion of the herbicide was 59.5% or 1,495 kg ha-1 of grains (p < 0.05), but the decrease of 46.8% or 1,141 kg ha-1 of grains between cross-sowing with herbicide and cross-sowing with double the plant population and without herbicide was not significant (p > 0.05). The absence of chemical management of weeds significantly decreased (p < 0.05) the yields of soybeans of determined and indeterminate growth habits, whereas reduced row spacing increased grain yields occurred only for the latter cultivars (Bianchi et al. 2010).