Comparison between extraction methods of photosynthetic pigments in Acacia mangium

Abstract: The aim of this work was to determine a simple and rapid protocol for the extraction of photosynthetic pigments (chlorophylls and carotenoids) from Acacia mangium (Willd.), a pioneer species with rapid growth and that has been used in commercial forests in northern Brazil. The experiment consisted of 4×5 factorial, 4 solvents (ethanol, dimethylsulfoxide (DMSO), N,N-dimethylformamide (DMF), and 80% acetone) and 5 extraction times (24, 48, 72, 96, and 120 hours). The equations used for calculations varied according to the solvent used. For a quantification of the photosynthetic pigment contents of A. mangium it is recommended to use 80% acetone with 84 hours of extraction since this solvent allows the efficient extraction of both chlorophylls and carotenoids with a single protocol.

Highlighted Conclusion
Determination of the Acacia leaves pigments (chlorophylls and carotenoids) it is possible with a single protocol in 84 hours, using an extraction with 80% acetone.

Acacia (Acacia mangium Willd. – Fabaceae) is a native species from northwestern Australia, Papua New Guinea and western Indonesia, which was introduced in Brazil about 30 years ago, leading to interest by its rusticity, rapidity of growth and being a nitrogen-fixing species (Smiderle et al. 2005, Aguiar Jr et al. 2013, Attias et al. 2014).

The analysis of foliar pigments is an useful tool for the study of plant responses to the environment and for the elaboration of management practices, aiming to increase the photosynthetic potential and plants yield (Pompelli et al. 2013, Daniel et al. 2016). These pigments can be divided into those that act actively in light capture in the photochemical phase, the chlorophylls, and those that act as accessory pigments in the dispersion of excess light energy, such as carotenoids (Streit et al. 2005, Cruz et al. 2007, Jesus and Marenco 2008).

Chlorophylls and carotenoids contents can be obtained by extraction with organic solvents (Silva et al. 2014) and there are several methodologies already elucidated for the extraction of these pigments in diverse vegetal species, as the use of ethanol (Wintermans and De Mots 1965, Lichtenthaler 1987), N,N-dimethylformamide (DMF) (Moran 1982, Wellburn 1994), 80% acetone and dimethylsulfoxide (DMSO) (Barnes et al. 1992, Wellburn 1994). However, there are considerable variations in the extraction of pigments, depending on the methodology used being that the main sources of variation include: (i) nature, polarity and purity degree of the solvent; (ii) temperature and incubation/extraction time; and (iii) the equations used, which must be specific to the different solvents (Porra et al. 1989, Tait and Hik 2003, Ritchie 2008, Barbieri Junior et al. 2010). In addition, the species is an important source of variation regarding the extraction methodology of photosynthetic pigments, since the contents of these compounds diversifies according to the organisms.

The aim of this work was to determine the best protocol for extraction of A. mangium foliar pigments considering four solvents and five extraction times.

The present work was developed in the Universidade Federal do Tocantins (UFT) – Campus Gurupi. Completely expanded leaves were collected from the apex of plants, approximately one meter high, located in full sunlight, in the seedling nursery of the campus. The randomly collected leaves were stored in plastic bags and immediately taken to the laboratory for the start of the analysis.

The experimental design was completely randomized in a 4×5 factorial scheme, with 3 replicates, totaling 60 samples. The first factor consisted of four solvents types (ethanol, DMSO, DMF, and 80% acetone), and the second, five extraction times (24, 48, 72, 96, and 120 hours).

The samples were composed of 100 mg of chopped leaves, eliminating the thicker veins, and weighed in an analytical balance. Then, these samples were transferred to tubes previously coated to avoid degradation of chlorophylls by contact with light. In the tubes were added 5 mL of the respective extractors. The pigment quantification was performed by spectrophotometry, with wavelengths of 665 nm and 646 nm for chlorophylls, and 470 nm for carotenoids. After each incubation time, at room temperature, the absorbance readings were performed in a digital spectrophotometer (Edutec EEQ 9023), for this, part of the solution was transferred to 3 mL glass cuvettes. 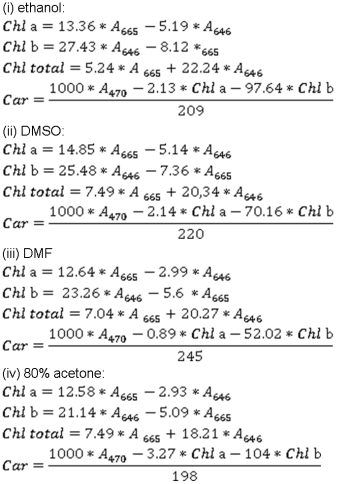 The analyzed variables were: chlorophylls a, b and total, chlorophyll a/b ratio, and carotenoids. Defined the best solvent, by means of derived from the equations, the maximum extraction points were defined for each variable. Data were expressed as mass of pigment per mass of fresh leaf (g.100 mg of FW-1). Factors were analyzed by regressions according to models available in the software SigmaPlot 10.0. 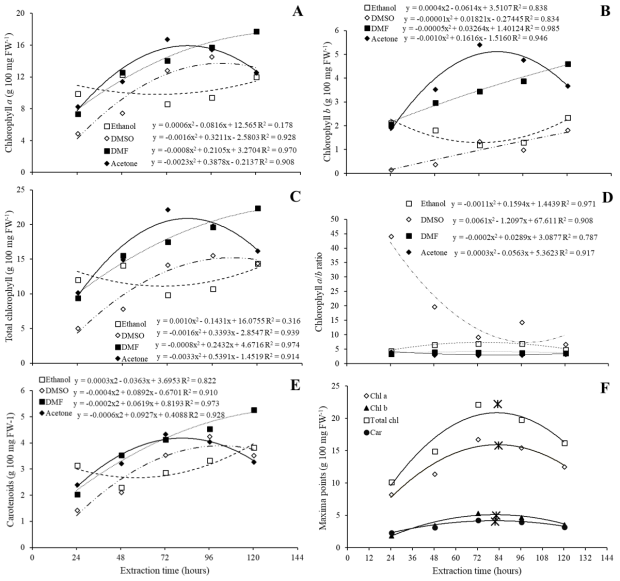 In relation to carotenoids, the data fit the polynomial model and presented coefficients between 0.822 and 0.973. The contents ranged from 1.4 to 5.3 g.100 mg of FW-1 (Figure 1E) The extraction pattern of this accessory pigment in the solvents used presented basically the same responses for the chlorophyll content.

Unlike what happened in the extraction of chlorophylls (Figures 1A, 1B, and 1C), the DMF was able to extract a greater level of carotenoids than 80% acetone, in less incubation time of the samples. While it took time over 96 hours of DMF extraction to obtain higher amounts of chlorophyll, for carotenoids after 72 hours the use of DMF becomes more efficient than 80% acetone (Figure 1E). Ethanol and DMSO were not efficient for the extraction of carotenoids from A. mangium (Figure 1E).

An increase in chlorophyll concentration over time is observed, except for ethanol. However, after 96 hours of incubation, a decrease in chlorophyll a and total contents occurred with 80% acetone and DMSO. There is also a decrease in chlorophyll b extracted with 80% acetone and this decrease is due to the prolonged exposure time of the leaves to these solvents, promoting the pigments degradation. It is worth mentioning that when using DMF, no decrease of pigments was observed, which means that the degradation of chlorophyll molecules by this solvent will occur after 120 hours of incubation. It is also interesting to note the response presented by ethanol, which had a different response from the others, both for chlorophyll a and b, and consequently total chlorophyll, wherein the extraction with this solvent shows a drop and subsequently an increase (Figure 1).

Barbieri Junior et al. (2010) aimed at defining the best chlorophyll extraction protocol in Tifton 85 grass leaves considering different solvents and extraction times, and they find minor variation in the concentrations extracted over time, regardless of the pigment and the solvent used. These results differ from those found in this work, where a great variation over time, depending on the pigment and solvent used, demonstrating how distinct species present different behaviors regarding pigment extraction methodologies.

In general, the solvent that recovered the largest amount of chlorophyll a and total was DMF. However, the contents with this solvent were higher than those extracted with 80% acetone only after 96 hours. In addition, for chlorophyll b, the maximum contents extracted were with 80% acetone. The long time required for the DMF to extract higher concentrations of chlorophyll a and total, makes it impracticable to use, because with the use of acetone the values found for these two variables are very close to those of DMF, and still in a shorter time extraction. The worst results found for extraction of chlorophyll a and b were ethanol and DMSO, respectively. Not being, therefore, recommended for the extraction of photosynthetic pigments of leaves of A. mangium (Figures 1A, B e C).

These results are opposite to those found by Cruz et al. (2007), in which for Bixa orellana L. hybrids the use of DMSO was recommended. In contrast, Barbieri Junior et al. (2010) obtained favorable results for 80% acetone for chlorophyll b, and lower recovery in DMSO, as well as those found in this study. The same authors point out the inefficiency of ethanol as an extractor of these pigments, and recommends DMF, DMSO, or 80% acetone for extraction of total chlorophyll of Tifton 85 grass. The different results found in distinct species, once again demonstrate the importance of determining a specific extraction protocol for each species, considering the time and solvent to be used.

It is observed that the chlorophyll a/b ratio is very high in the first hours of DMSO extraction, evidencing previous results. Demonstrating the inefficiency of DMSO for the extraction of chlorophyll b in shorter periods. The ratio obtained using ethanol showed insignificant variation as a function of time. In the same way, it occurred with the other solvents, being practically uniform, being, therefore, the most suitable for the extraction of the two types of chlorophylls (Figure 1D).

DMF is the most recommended solvent for the extraction of carotenoids. However, in the extraction of chlorophyll pigments, mainly of type b, where it excelled in relation to DMF, 80% acetone presented satisfactory results. Thus, to determine a fast and operational protocol for the extraction of photosynthetic pigments from leaves of A. mangium, the maximum extraction points of the pigments were established considering 80% acetone. There is a demand to reduce as much as possible the time of accomplishment of some activities, also reducing the costs of analysis. In this way, it is verified that approximately 84 hours after immersion in 80% acetone, it is the time in which the maximum recovery of pigments is obtained (Figure 1F), being the time and extractor recommended for the extraction and quantification of chlorophyll and carotenoid contents from leaf samples of A. mangium.